Organized by a handful of maverick aviators with more dreams
than money in their pockets, Transocean Air Lines became the
largest supplemental air carrier in the world, employing at its
peak over 6,700 workers at some 57 bases around the globe.

All photos and text here are from the Transocean Air Line Alumni Association.


You can view the TALOA site here.

Hangar 28
Transocean's maintenance and engineering division was established in July 1946 to service TAL's airplanes at Hangar
28 near the company's headquarters in Oakland. The aircraft mechanics built and overhauled engines on top of sand
bags until there was enough money to buy engine stands.

The first major conversion project completed by the newly formed maintenance and engineering department was turning
a war-surplus B-17G, owned by Colonel Andres Soriano, into a private plane. Transocean's connection with Soriano, the
president of Philippine Air Lines, had begun when Transocean helped establish PAL in 1946. Knowing that Soriano's
hobby was aerial photography, director of maintenance Al Morjig and his men removed the bomb-bay door from the
generously-windowed nose section of the aircraft and transformed it into a luxurious parlor with comfortable chairs where
Soriano could take in-flight photographs.

Concerning alterations of a more practical nature for that aging B-17G, chief engineer Al Macedo designed and developed
methods whereby a Jack and Heintz hydraulic auto-pilot for automatic flight control could be installed by the aircraft
mechanics of Hangar 28. This was a first for such an aircraft. 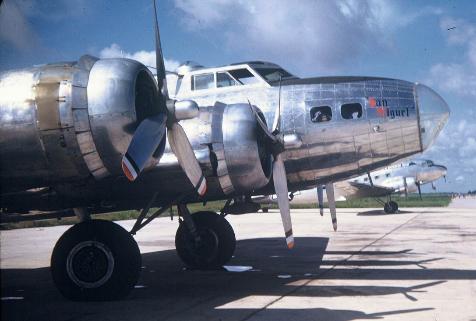 "Kansas City Kitty,"
a DC-4 put into first class shape
by TAL's Hangar 28 maintenance
and engineering team.
By the end of 1952, under the guidance of Morjig and Macedo, Transocean's team of precision aircraft mechanics and
other craftsmen (such as Bill Glenn, Dave Cook, Dave Tyler, and Mike Lewis), had accomplished many notable feats. One
of these was the transformation of a wrecked airplane known as Kansas City Kitty. Nelson found the aircraft, a DC-4, in a
field while traveling in Kansas, tracked down the owner and purchased it.
Bill Word and a crew were sent to fly it back to Oakland to be rebuilt. What they found was a derelict with broken windows,
electrical wiring dangling throughout the cabin, and the landing gear locked in the down position. They managed to fly the
wreckage back to Oakland despite these obstacles, arriving nearly frozen and looking distinctly battle fatigued. Just the
ghost of an airplane, it was one of the most unusual looking craft ever to taxi through Transocean's hangar doors. In just
six weeks, new engines were installed and all of the repairs made up to airworthiness standards emerged from the
hangar as a first-class airplane and became an important addition to the airline's fleet. 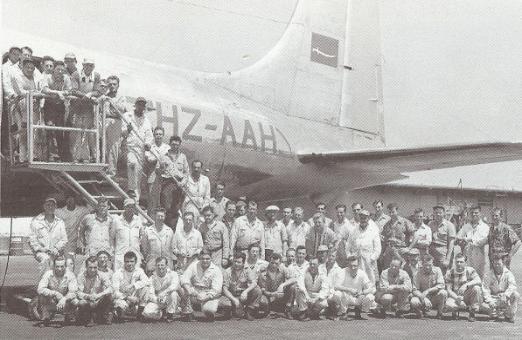 Perhaps the most well known and exotic of Transocean's conversion projects was the Flying Palace, the personal
aircraft of Saudi Arabia's King Ibn Saud, who, during his reign, unified six million people scattered over 900,000 square
miles of desert.
Transocean sold and delivered to the Saudi government, five DC-4s the last of which was the million dollar flying carpet
that the 72-year-old monarch would use to travel between his winter palace at Riyadh and his summer palace at Taif,
500 miles away.
Painted on the plane's vertical stabilizer was the gold, white and green royal crest with crossed swords and palm tree.
The 50-foot long royal cabin contained a bedroom with a double bed, a swivel throne on a dais (the throne was actually a
customized barber's chair) in which the King could turn to face the holy city of Mecca. There were also eighteen
foam-cushioned chairs for guests, plus sleeping quarters for a four-man crew.
A folding elevator (copied from President Franklin D. Roosevelt's personal presidential plane, the Sacred Cow), was designed by Max Elbaum, chief engineer at TAL's Connecticut division. The elevator was installed at the rear door of the aircraft to allow easy access for the King, who was crippled with arthritis. His first test of the elevator, with his bodyguards and family in attendance, was a tense moment for Sam Wilson as he threw the switch to lift the King. When the mechanism worked smoothly and without a hitch, Wilson breathed a sigh of relief, fearing no longer for his life
Far-fetched though it may sound, Nelson once bought the fuselage of a DC-4 that was in use as a hot dog stand near
Oklahoma City. Those who knew him were not surprised. Nelson scrounged parts and engines to make it flyable. And
when it had been reassembled by Transocean's maintenance and engineering team, it went to work flying around the
globe as Oklahoma City with the rest of TAL's fleet.

Miracles became routine for Transocean's Maintenance and Engineering Department. The rebuilding of a "damaged
beyond repair" DCA, owned by Resort Air Lines, once again proved their remarkable skills. The aircraft was parked at the
Municipal Airport at Ogden, Utah, where it had been heavily damaged upon landing. The entire front end, from the bulkhead
just behind the cockpit door, was gone, and had to be rebuilt from that point. When TAL's assistant superintendent of
maintenance Mike Lewis and the crew of ten mechanics arrived at Ogden that January day in 1953 to dismantle the aircraft
for shipment to Oakland, it was parked in two feet of snow. Within ninety days after its arrival at Hangar 28, the aircraft was
ready to fly again.


Later that year, Transocean completely built an aircraft from parts scavenged from around the world.  It is believed that this
was the first time that an airline successfully built-up a complete airplane in this way. The project began when one of
TAL's executives heard that a fuselage, center wing section, and tail section from a late model Douglas transport were in
storage in Argentina. It was owned by Lee Mansdorf and Company, a broker of used aircraft and aircraft parts.

The machine was first owned by the ATC and used in World War II, after which it was declared surplus property and sold to
the government of Argentina, which had luxuriously fitted the aircraft to serve as the personal transport of President Peron.
It was later sold to Lee Mansdorf and Company. When Transocean purchased it in September of 1953, the disassembled
aircraft was put aboard a freighter bound for Oakland, California. Once in Oakland, the three sections were barged up the
Oakland Estuary to a point near TAL's headquarters where they were trucked to Hangar 28.

Reminiscent of kids putting a model airplane together from the hundreds of pieces in a box, the men in the maintenance
department found themselves faced with the task of cataloging the thousands of parts needed to make this huge transport
once again flyable. It was a massive job that called for a lot of attention to detail and much patience. For example, Bill Dell
and Bill Baty spent three weeks sitting in the center section of the fuselage just untangling the thousands of cables coiled
on the floor like a mass of spaghetti. When the cables were reconnected, every one of them worked flawlessly. In only two
months and four days, the Transocean crew had assembled a CAA certified DC-4.

Named the Argentine Queen, this reassembled DC-4 was one of Transocean's most dependable aircraft for years. It was
later chartered to Airwork Atlantic, Ltd., and with a TAL crew on board for training, inaugurated that company's transatlantic
freight service on March 1, 1955. The Argentine Queen was operated by several airlines after TAL's demise and crashed at
sea 700 miles west of San Francisco on March 28, 1964.

Transocean Air Lines was known around the world for its innovative approach to accomplish its mission. The story of
Benny Big Feet illustrates this. Benny Big Feet was a C-47 at TAL's Alaskan operation at Pt. Barrow. It was brought to
Hangar 28 at Oakland where it was transformed into a ski plane. This would make it possible for the C-47 to land on the
snow on the North Slope. The installation of skis was also repeated by TAL for the Argentine government.


The impossible was always being turned into reality at Transocean. A refueling stop at Keflavik, Iceland, by a TAL DC-4
was the stage for yet another miracle.

When the aircraft was ready to depart after servicing at Keflavik, the pilot misunderstood a signal from a member of the
ground crew and taxied straight into a flight line power unit. One of the airplane's wings burst into flames. Fueled by the
leaking gasoline, the flames threatened to consume the entire aircraft. However, they were stopped when the damaged
wing burned to within one foot of the fuselage.

Al Morjig, from Oakland, was at Keflavik and he wired Orvis Nelson and Al Macedo the details of the accident. Macedo
determined that the aircraft could be salvaged by splicing a wing onto the fuselage - until then an unheard-of operation in
view of the extensive damage.

Macedo, twenty-three mechanics, and a machinist immediately left for Iceland with the pieces of a salvaged wing. Within
hours of their arrival in Keflavik, the mechanics stripped off the burnt wing while Macedo began the engineering work at
the navigator's table inside the aircraft. With directions from Macedo, the mechanics began piecing together the wing.
When they had built a complete wing it was raised into place and carefully spliced onto the fuselage.

Then there were innumerable delays until approval of the engineering for the four wing splices by Douglas Aircraft
Company finally was forth coming. This approval was necessary before the CAA would issue a certificate of
airworthiness for the aircraft. CAA officials might have had their doubts about the safety of the spliced wing but not the test
pilot, Macedo, Morjig, and the team. The test flight was an unqualified success, and another footnote was added to
Transocean's list of accomplishments.