Bay Area Spotters
Pacific Southwest Airlines British Aerospace BAe-146
N348PS, August 1986. By Randy Juran via Ed Coates Collection Notes:  Looking for a more economical aircraft for its short haul stages, PSA ordered 20 (with options on another 25) of British Aerospace's 146, the STOL (at least for a jet) and quiet four jet which began life as the Hawker Siddeley HS146.    Due to cancelltions of orders by airlines which were going under (the 1980s failure rate of deregulation upstarts was phenominal) they were able to get more or less immediate delivery of them from Hatfield.  The above shot taken by Randy Juran at San Jose Airport in August of 1986 outlines the aircraft's salient features well.

An incident occured on 7 December 1987 which tended to marr the reputation of the 146 although it had nothing to do with the aircraft at all:   A recently fired USAir employee (this carrier was in the process of absorbing PSA - see below) used his now invalidated credentials to board Flight 1771 from Los Angeles to San Francisco.  He managed to smuggle a pistol on board and shot his former supervisor (he had been laid off for allegedly purloining airline property).  He then shot the flight deck crew (and probably himself) causing the aircraft to plummet to its doom near San Luis Obispo. All five crew members and the 37 other passengers were killed.   I was working in the Bay area at the time and had occasion to dispatch staff to  San Diego (actually Tijuana) from time to time.  One employee of mine refused to fly the BAe 146 after this.  Admittedly this person was strictly of the "NIH school" ..... i.e. considered anything not built in the US as unairworthy!  (This attitude prevailed at the time [probably still does], amongst a certain class of employee - whom shall remain nameless!).
Footnote on PSA:
After American Airlines had purchased AirCal (PSA's most serious rival) in 1986, and threw the might of their corporate power into the California market, the writing was on the wall so far as PSA was concerned.  The pressure had really mounted when Continental filled the gap left by the folding of Pacific Express.  USAir had had its eye on PSA for years.  Finally in 1986 the Board agreed to a merger.  In 1987 PSA operated as a Division of USAir., but by 8 April 1988 the last PSA flight departed San Diego for Las Vegas and the low cost carrier born 39 years earlier disappeared. The Grinning Birds were all repainted in USAir livery, sans, of course, their smiles.................... 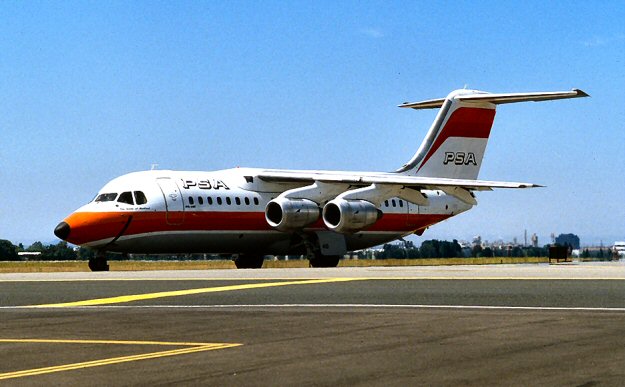