Not too many airliners have survived crash landings at off airport locations and have lived to fly again. This is the story of one such crash survivor.

By Richard Silagi  March 30, 2001, on airliners.net
On November 22nd 1968, Japan Air flight #2 was nearing the end of a routine flight from Tokyo to San Francisco. Captain Kohhei Asoh, a 15 year JAL veteran, was in command of the flight, which was being operated with a new DC-8-62. JA8032 (msn # 45954) had rolled off the Douglas assembly line in April of 1968 and had been in service with JAL for only four months.

Instead, he was nearly in the waters of San Francisco Bay. He applied power, which raised the nose somewhat, and then the right main landing gear hit the water, followed by the left, and then the aircraft slewed to the left. Capt. Asoh cut power the aircraft settled into the shallow waters of San Francisco Bay. The aircraft hit the water slightly nose-up, about 500 yards (450 m) from the Coyote Point Yacht Harbor and a couple miles short of the runway, in about 9 ft (3 m) of water. Once the plane came to a stop, it started to sink. The plane finally came to a stop when the landing gear settled into the mud at the bottom of the bay, and the rising water stopped just short of the bottom sills of the cabin doors. Luckily all of the passengers and crewmembers escaped the incident without injury. According local newspaper reports of the incident, most passengers did not even get their feet wet!

One interesting factor, which may not have caused the crash but did not help prevent it, was that the FAA had just recently decommissioned and removed the Precision Approach Radar (PAR) system at SFO. Had that equipment still been operational, the controllers in the tower could have alerted the crew to their low approach. Apparently the FAA had decided to remove the outdated system since very few airlines were still using it. 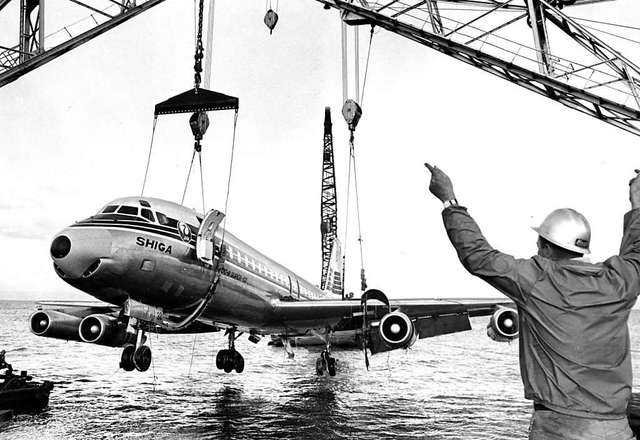 Art Frisch/Chronicle 1968
United Airlines maintenance crews then spent the next four months repairing the aircraft. First, all 36 miles (57.6 km) of wiring was replaced at a cost of about $220,000. All of the flight and engine control cables were also replaced. Other major repair items to the aircraft included:
In addition, all hydraulic units, as well as 90% of the pneumatic and air conditioning systems, were removed and repaired or replaced. All instrument panels were removed and instruments tested. Fuel valves and pumps were removed, fuel tanks were flushed and samples taken to make sure no salt was present.

The plane continued to fly for Japan Airlines for 14 more years until it was sold in March 1983 to Air ABC and reregistered as TF-BBF. In May of 1983 the plane was leased to Hamzair until December 1983 when it was returned to Air ABC. In July of 1984 it was sold to Okada Air of Nigeria and reregistered as 5N-AON. A few years later, in April of 1987 the plane was purchased by Airborne Express and reregistered as N808AX. Currently this plane is still a member of the Airborne Express fleet, and is still flying 32 years after the crash. I guess the airline officials made a wise decision to spend the money repairing it instead of sending it to the scrap heap. Obviously this plane was too young to die. 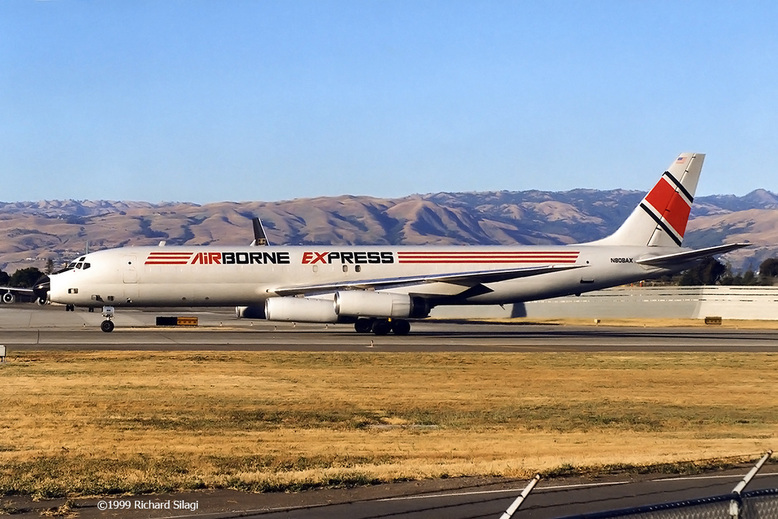 Post Mortem: Sad to say, 808AX may have survived the bay but couldn't make it past the "claw". After a fruitful career as a express freighter for Airborne Express, years of service and insipient pylon cracks caught up with this old water dog. In December of 2001 N808AX met its demise on the ramp at Wilmington (ILN) at the hands (hydraulic jaws) of a salvage crew.