Photos used with permission from Bill Hough's SJC-Images From The Sky.

You can visit the websites here: 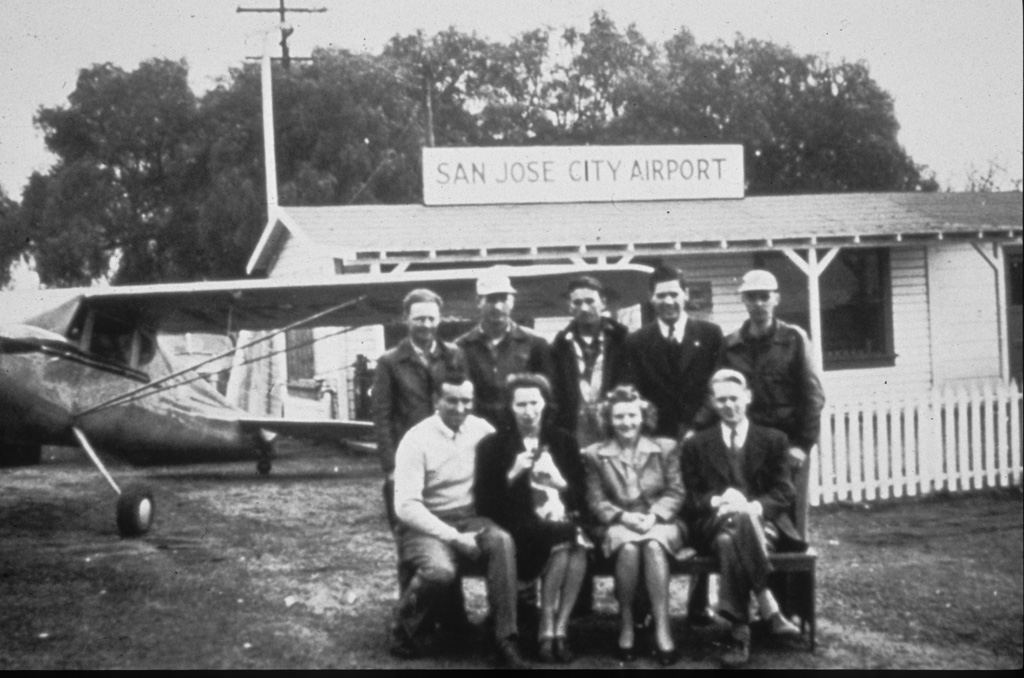 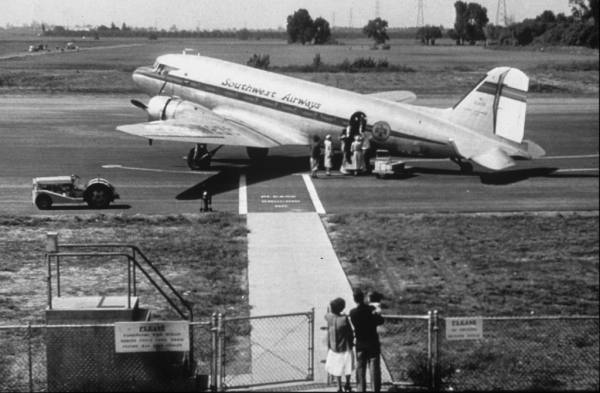 SJC’s first airline was Southwest Airways, a predecessor to Pacific, Hughes Airwest, Republic and Northwest. Shortly after the airport opened, one of the carrier’s DC-3s boards passengers at the SJC’s original terminal, located at the southern end of the lengthened Runway 30R. (SJC) 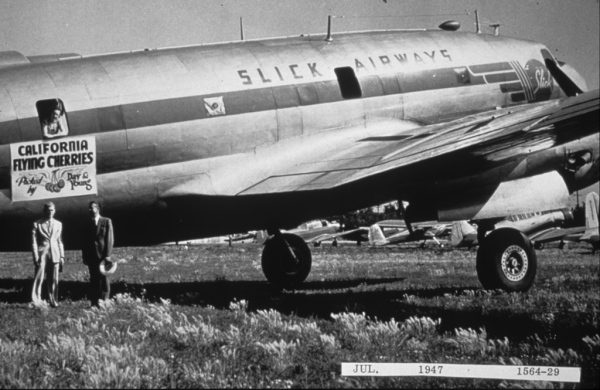 An early example of airfreight is shown here with this 1947 view of a Slick C-46, carrying a commemorative shipment of “California Flying Cherries.” (SJC) 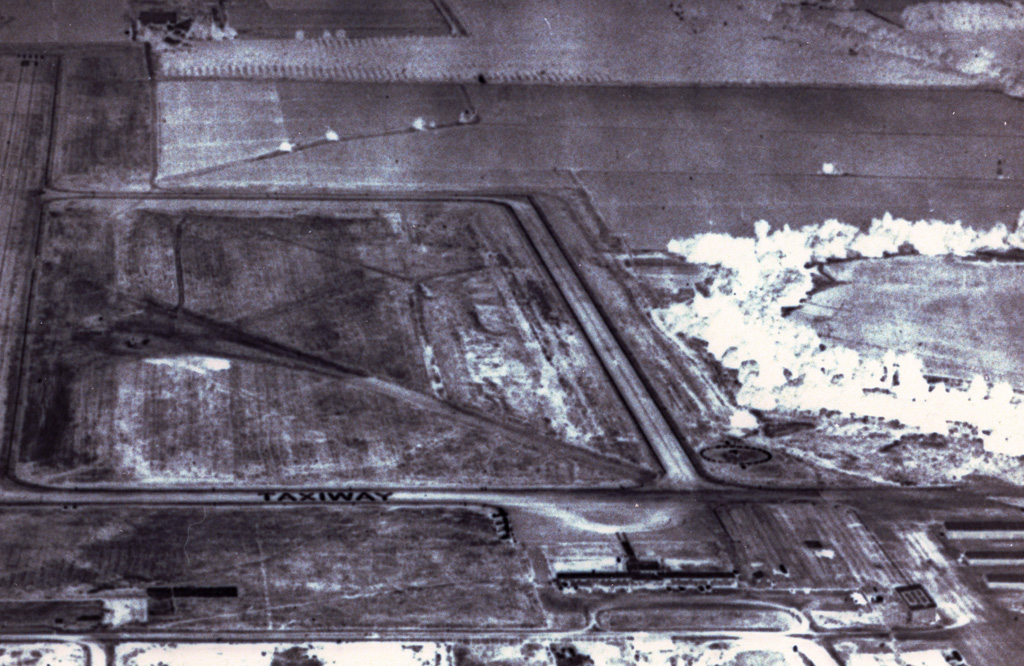 ​When SJC opened in the 1940s, the airport was confined to an area south of Brokaw Road. The original terminal was linked to Runway 12-30 by a clearly marked “Taxiway” which is today’s Taxiway Alpha. (SJC) 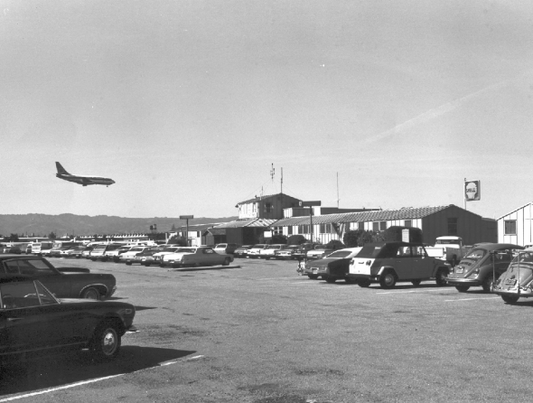 ​​When Southwest Airways began serving SJC in 1948, this terminal at the southern end of the field was sufficient to handle the airport’s commercial flights. After commercial operations moved to the 1965-built terminal, the old terminal became a general aviation terminal until being demolished to make way for the extension of Runway 12L-30R in the early 2000s. The building is seen here in 1974, with an Air California 737 on approach to Runway 30L visible in the distance. (SJC) 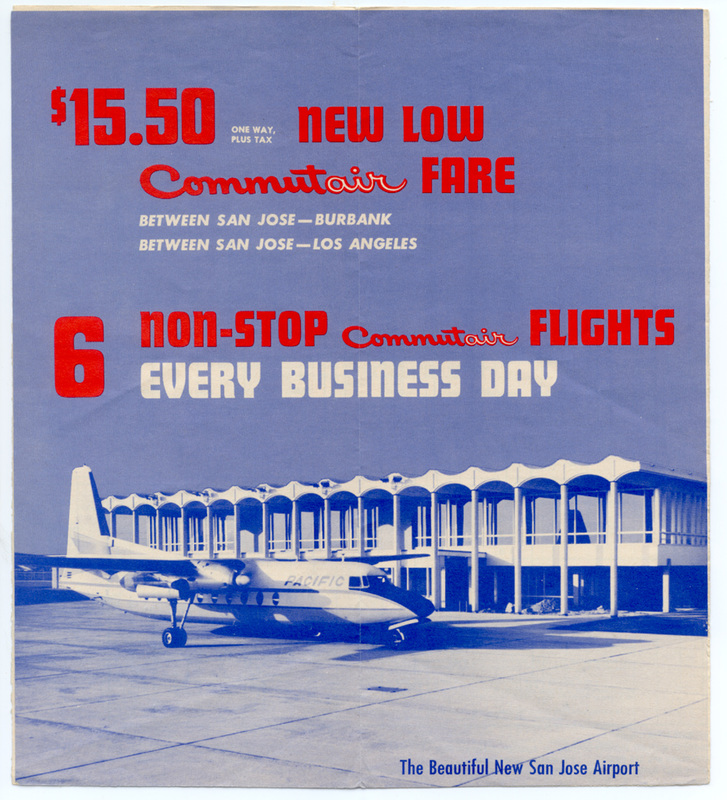 ​When SJC opened its terminal in 1965; Pacific Air Lines was the only carrier serving the city. This mid-1960s timetable advertisement highlights PC’s six F-27 flights from SJC to Southern California. (Pacific Air Lines) 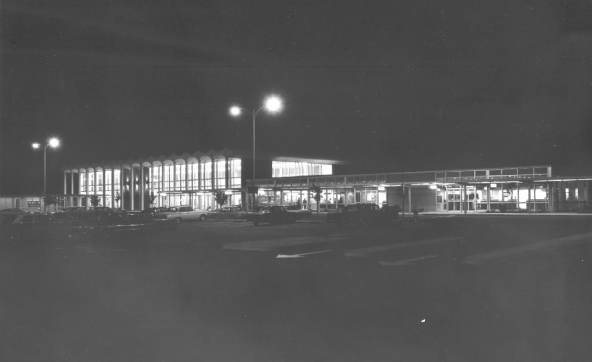 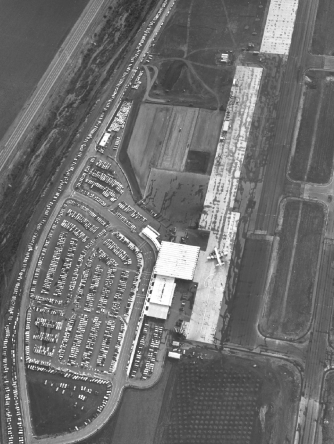 This photograph illustrates the as-built configuration of the 1965-built terminal, before the southern gates were added in 1969. A Lockheed Electra waits for passengers in this circa-1967/8 view. (SJC) 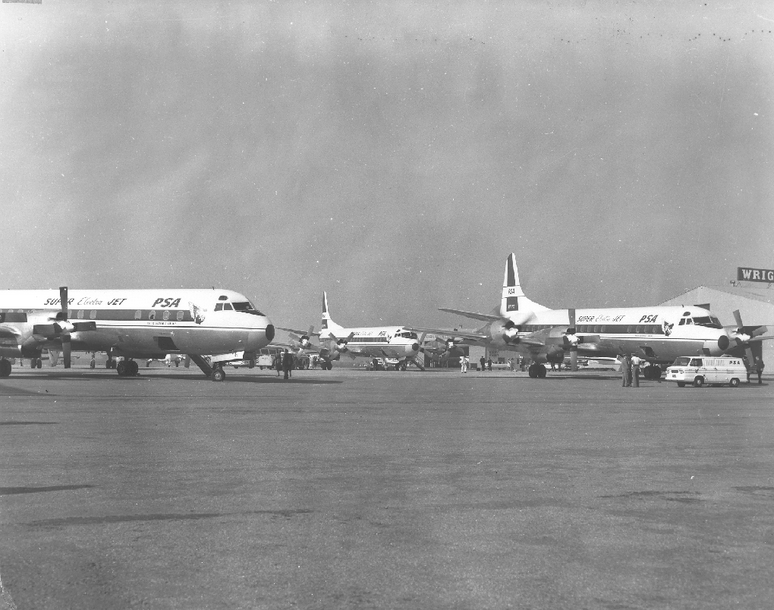 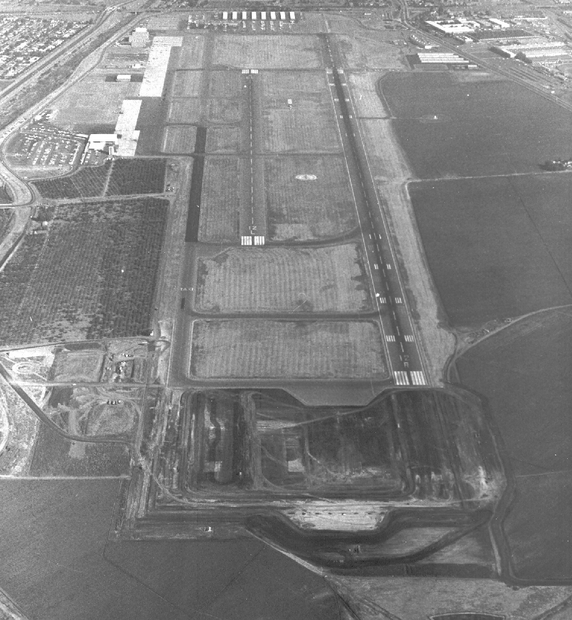 ​SJC in the mid-1960s had two runways; 12R-30L, which was 7,000 long and parallel Runway 12L-30R which was 4,419 feet long and used mainly by general aviation aircraft. In this view, the 1965-built terminal is visible at left, the original terminal, relegated to general aviation use, is visible at the top of the photo. In the foreground, work is beginning on extending Runway 12R-30L. (SJC) 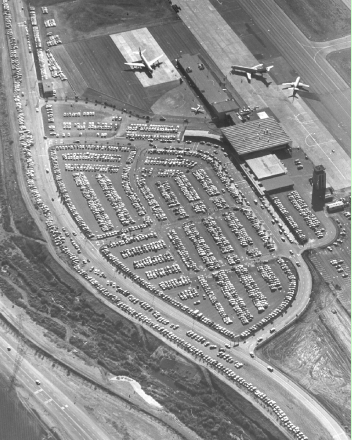 ​In August 1969, the airport opened a new six-gate extension on the south end of the terminal. Four months later, passengers board a PSA 727-200 flight as an Air California 737 headed for Southern California taxis away. A United DC-8 is parked at Gate 5. (SJC) 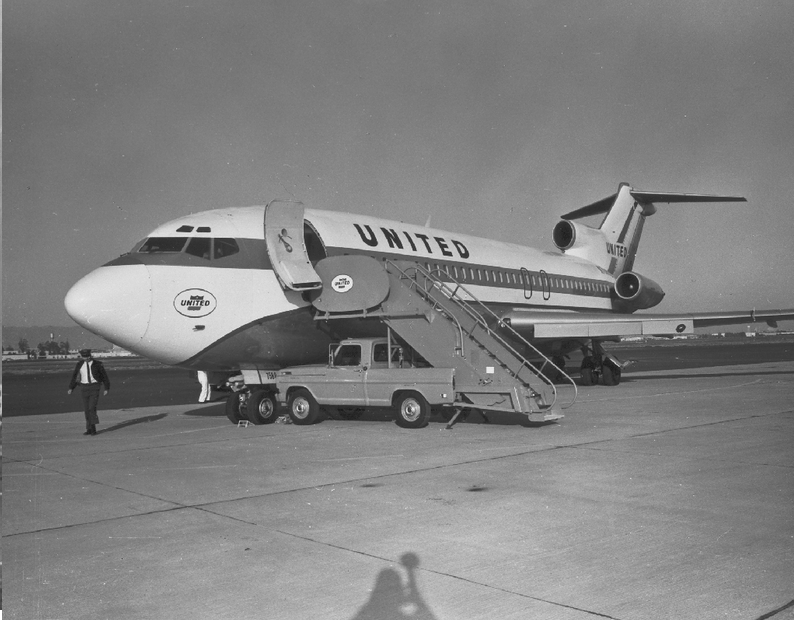 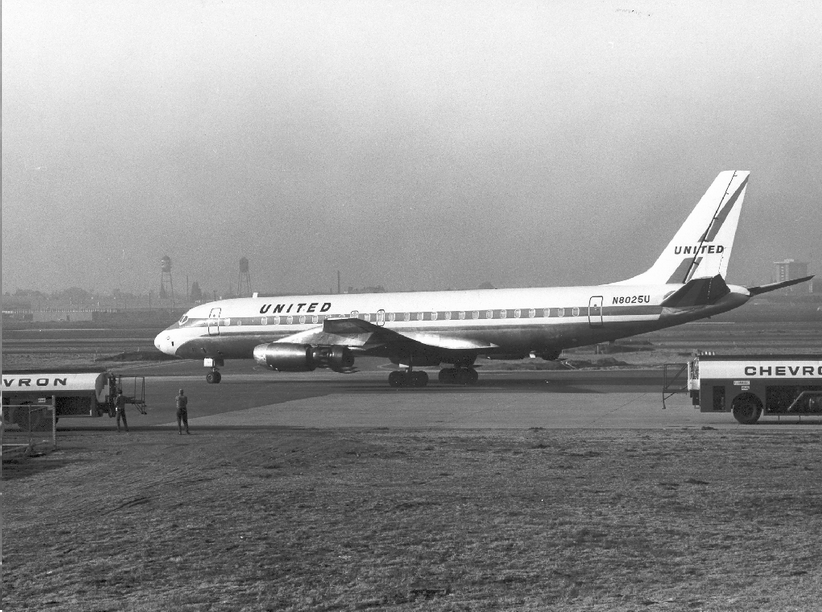 In the late 1960s, as part of the "PSA Gets you right where you live" ad campaign, the carrier released this ad for SJC/OAK-BUR service.

​​During the late 1960s and 1970s, there were many proposals to expand or replace SJC. One terminal expansion proposal involved expanding the southern concourse with a gate rotunda, as illustrated in this model. Someone at the airport was obviously hoping for international flights by placing a model of a Swissair Convair 990 on the adjacent taxiway. (SJC) 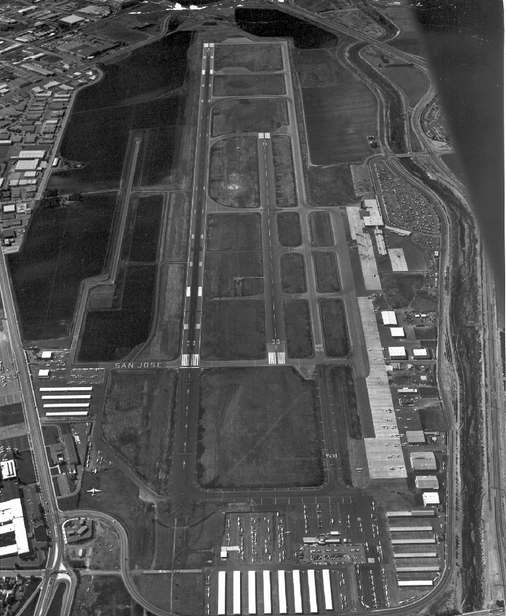 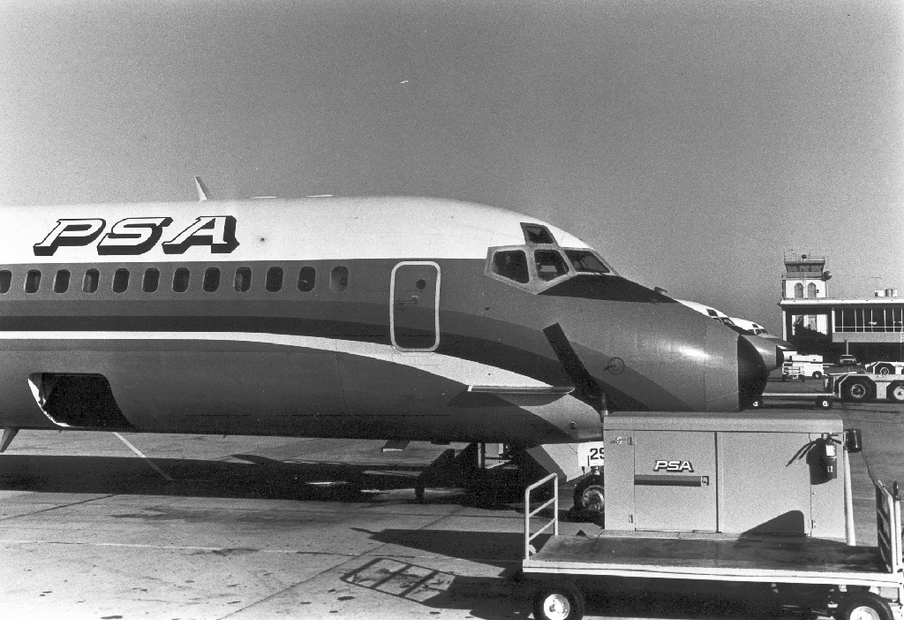 ​This early 1980s view of the SJC ramp highlights a PSA MD-80 laying over for its next flight. The 1957-built control tower is visible in the background. (SJC) 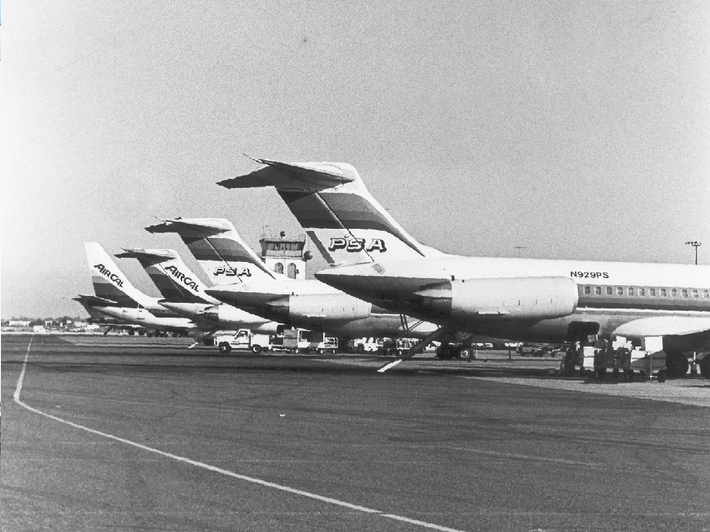 ​For two decades, SJC was dominated by two famous California-based airlines, Pacific Southwest Airlines and Air California. By the early 1980s, the latter carrier had changed its paint scheme and shortened its name to “AirCal.” In this view, a pair of PSA MD-80s share ramp space with an AirCal MD-80 and 737. Soon this view would be history as USAir and American Airlines acquired PSA and AirCal, respectively. (SJC) 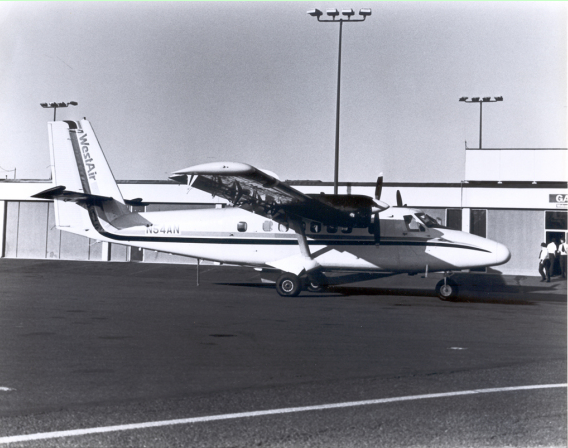 Westair operated DHC-6 Twin Otters into SJC during the 1980s. In this view N54AN is waiting for passengers at Gate 1. (SJC) 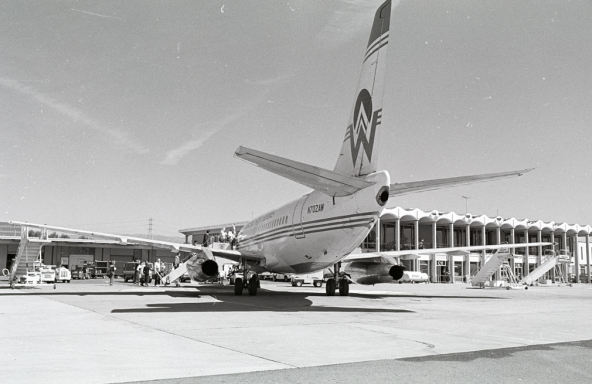 ​One of the first post-deregulation carriers to start flying to San Jose was Phoenix-based America West Airlines. In this early 1980s view, passengers board Boeing 737-130 N702AW (msn/ln 19015/4) with the 1965-built terminal visible in the background. (SJC) 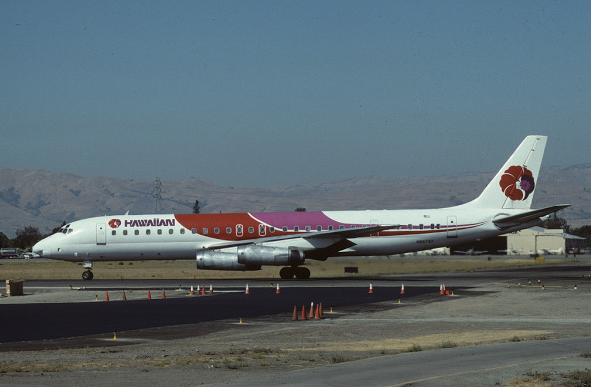 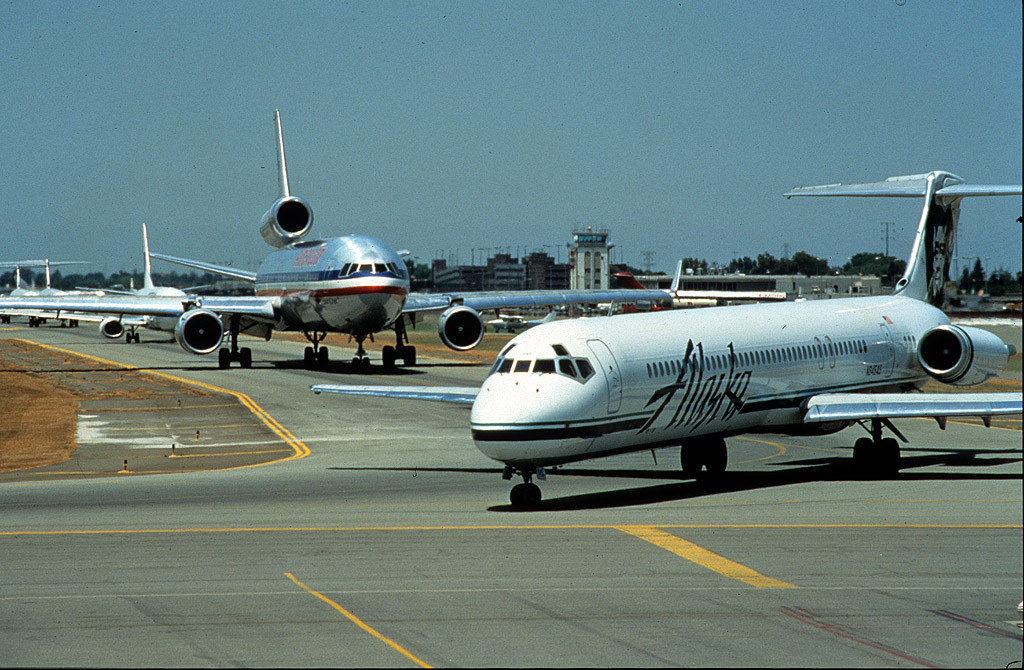 ​Before Runway 30R was extended to become SJC’s primary departure runway, long lines of departing aircraft waiting to use Runway 30L built up during peak times. In this view, Alaska Airlines MD-83 N945AS / 945 (cn 49643/1423) turns onto taxiway A in this view from the early 1990s. (SJC) 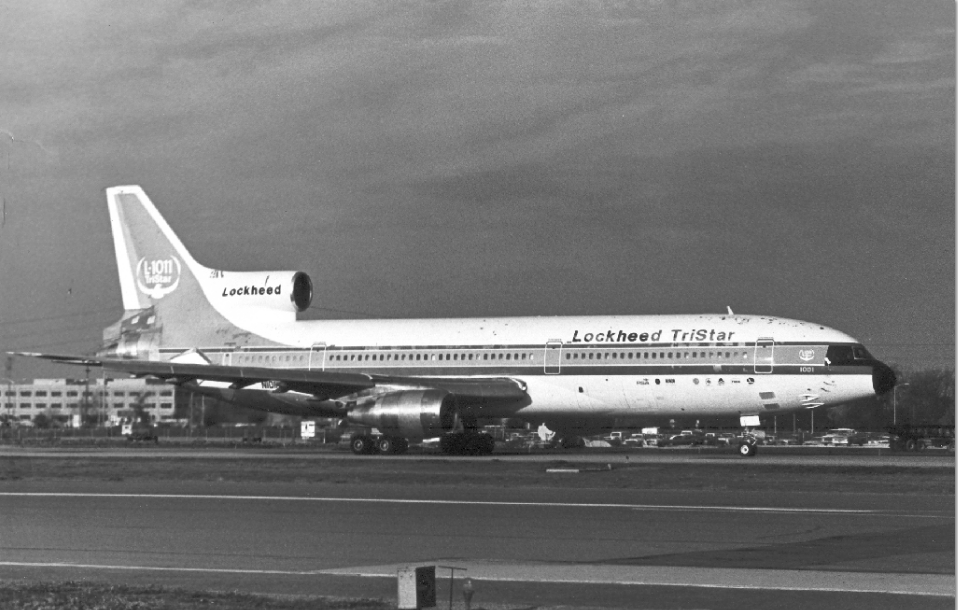 ​Widebody aircraft were infrequent visitors to SJC in the early 1970s. One such visitor to SJC was Lockheed L-1011 prototype N1011 (cn 193A-1001). At the time, PSA had five TriStars on order, although the airline would ultimately only operate two on the SFO-LAX run. (SJC) 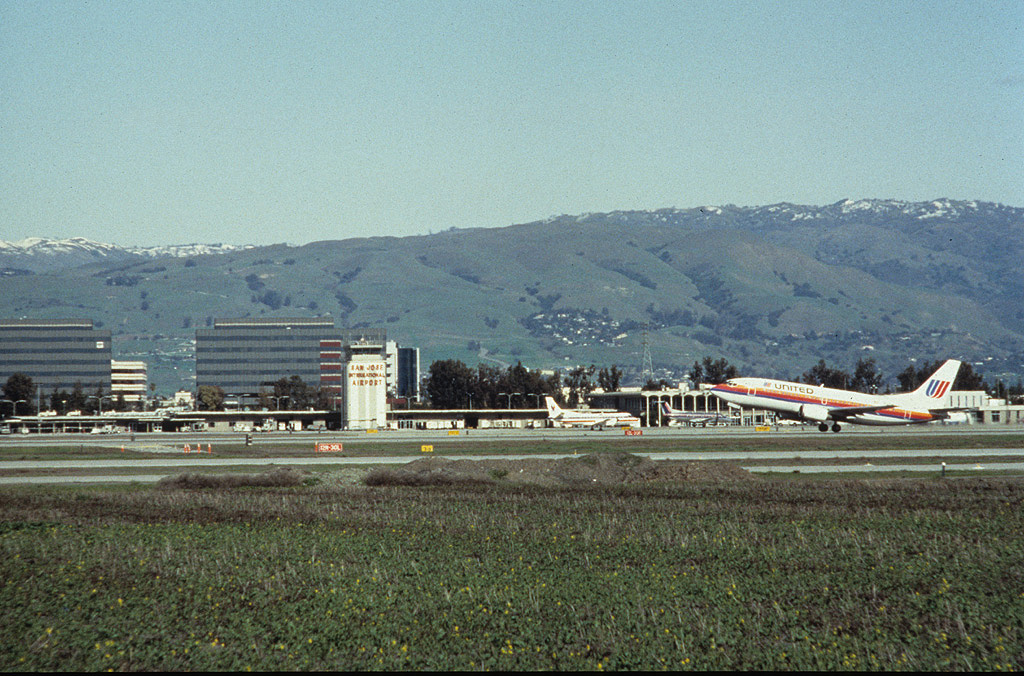 ​The sign on the 1957-built control tower has been changed to read “San Jose International Airport” in this late 1980s view, which also features one of United’s then-new 737-300s rotating on Runway 30L. A new tower would replace this one in 1994. (SJC)