Bay Area Spotters
California Central Airlines  Douglas DC-3
N12935,Part of Ed Coates Collection. Notes: California Central Airlines was one of the airlines owned and operated by Col. Charles Sherman. His holding company was Airline Transport Carriers (who also owned California Hawaiian Airlines), and ATC flew as a non-scheduled airline in its own right from 1947 to 1949.  Upon receiving its intra-state certificate it was renamed California Central.   The above shot was taken by Bill Larkins at Oakland in 1953.   N12935 was built in 1942 to an Eastern Air Lines order (was to have been NC30033) but the intervention of WW II had it diverted to the USAAF as a C-49K-DO (43-2010). It also served with Ozark Airlines as N148D. 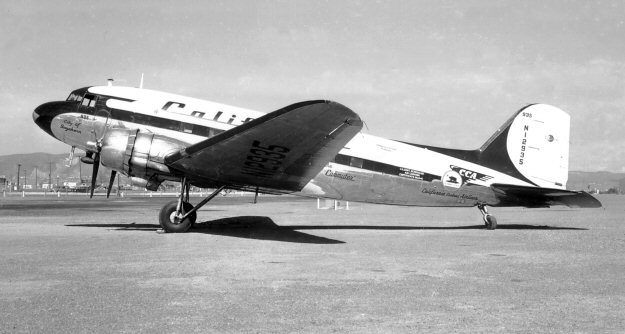